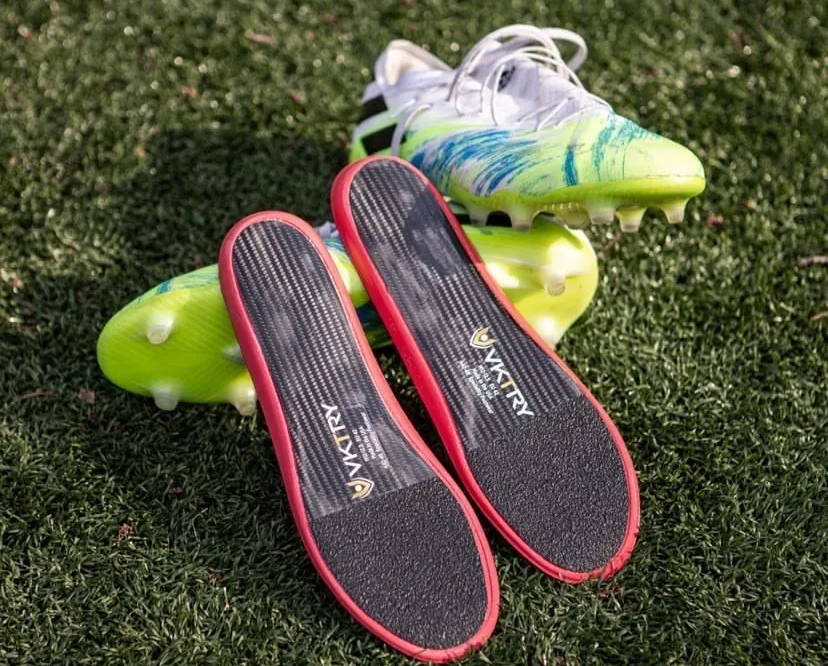 When it comes to sports insoles, athletes have a lot of choices. That's the good news. The bad news is that navigating all these options can be confusing and lead to many questions:

1. Do I really need sport insoles? Are insoles good for sports?

In this article, we will attempt to answer these questions, and hopefully guide you to the sports insoles that are right for you.

1. Do I really need sport insoles?

Most sports require some degree of running and jumping. And that action requires athletes to exert more force into the ground. Sports insoles are designed to support and stabilize the foot, as well as to provide more shock absorption in order to reduce the load on the joints. Most sports medicine experts will recommend the proper footwear and many times, that means the proper insoles. Power and speed in sports starts with a stable foundation. An unstable base can result in, not only reduced performance results, but quite possibly foot and lower leg injuries. As the name implies, sports insoles are good for sports – and good for athletes.

It’s true that most sports footwear comes with factory insoles. However, it’s also true that shoe manufacturers spend very little on these inserts – typically a very thin layer of foam with no structure. These factory insoles provide nominal shock absorption and stability, making them less than optimal for athletes. Many sport shoe manufacturers have “lightweighted” their products. Removing structure from the footwear may make the shoes more lightweight (faster?), but it also makes the shoes less stable, and that can result in more foot and lower leg injuries.

The best selling and best-known brand of insoles is Dr. Scholl’s. Their products are found in mass market and drug stores and sell predominantly on comfort. Other aftermarket insole brands (like Superfeet, Spenco, Currex, Sof Soles) can be found in sporting goods and specialty running stores. These products provide very good arch support, heel stability and comfort and are typically made from foam (polyurethane or EVA) with a plastic heel cup.

In all honesty, the insole category has been fairly boring for decades. That is until the VKTRY brand launched about 5 years ago. Made from full-length, aerospace-grade carbon fiber, VKTRY Insoles provide comfort, arch support and heel stability (like other sports insole brands). But VKTRY also provides energy storage and return to propel the athlete forward and upward. And the carbon fiber baseplate acts as a “spring” for maximum shock absorption unlike no other insole brand. VKTRY has redefined performance insoles.

"VKTRY provides energy storage and return to propel the athlete forward and upward. The carbon fiber baseplate acts as a “spring” for maximum shock absorption unlike no other insole brand."

Many walkers, hikers and runners will choose a standard insole brand like Superfeet, Spenco, Currex or Sof Soles. These insoles will provide the support, stability and cushioning to satisfy most athletes moving forward in a straight line at a reasonable pace.

VKTRY Insoles have been designed with the explosive athlete in mind due to the carbon fiber baseplate. And because all athletes are not alike, the spring strength (aka Pro Level) of the base is personalized for the athlete based on a proprietary VKTRY algorithm which takes into account several variables (athlete gender, age, and body weight). Years of R&D have gone into designing the algorithm which determines the right Pro Level for the athlete (>95% accuracy).

Additionally, VKTRY Insoles come with unique top covers based on the sport because, for example, a soccer cleat fits much more tightly than a basketball sneaker. Once again, the VKTRY algorithm determines the right top when the athlete chooses the sport:

VKTRY Insoles are the only insoles on the market that have been scientifically proven to help increase athletic performance – yes, insoles that can help athletes jump higher and run faster. A PhD-led study in New Haven, CT showed that athletes wearing “VKs” increased their explosiveness (aka rate of force development) by +9.3%. Testing in controlled settings showed that athletes wearing VKTRY Insoles were able to jump higher (average +1.6”) and run faster (average improvement of 0.12 seconds in the 40 yard dash).

These claims do not imply that athletes can replace training, practice, and hard work with VKTRY Insoles. Research shows that when using VKs, the more force an athlete applies (energy storage), the more impactful the results (energy return). VKTRY has sold over 100,000 pairs of insoles and has Trustpilot testimonials from thousands of athletes, many of which have achieved PBs (personal bests) with VKs.

6. Can insoles help protect me from injury - or help me recover from injury?

Most after-market insoles will provide improved support, stability and shock absorption, as compared to the factory insoles that come with the shoes. Many insoles claim to be able to help athletes recover from nagging injuries like Plantar Fasciitis due to extra support in the arch to relieve pressure on the inflamed fascia. Because the severity of injuries can vary, it’s always a good idea to consult with your physician when treating an injury – even with something that seems simple – like wearing insoles.

In 2017, VKTRY conducted field research at 4 major universities. A total of 263 D1 football players wore VKTRY Insoles for a full season of practices and games after which, the school’s athletic training staffs provided the results. The study found that athletes at these programs experienced 41% less foot/toe injuries and 22% less lower leg injuries (knee/ankle/foot) as compared to the 3 years history for the teams.

In 2020, the Korey Stringer Institute at the University of Connecticut conducted a Ph-led, independent study of VKTRY Insoles for 6 months. They found that VKs significantly improved stability and shock absorption for athletes. This research explains why the field research in 2017 resulted in injury reduction – and how VKs can be helpful in treating injuries like shin splints, turf toe, stress fractures, Achilles Tendinitis, knee/ankle injuries and Plantar Fasciitis. Harvard Mass General also completed a study of VKTRY Insoles in 2021 stating that VKs significantly improved patients who were suffering from arthritis in the foot/toes.

When you consider the design of VKTRY Insoles compared to most standard insoles, the research findings should come as no surprise. VKTRY is the only insole that provides full length, heel-to-toe support and stability due to the full-length carbon fiber base. And when most insole brands claim “shock absorption”, they are really only referring to the compression of the foam. With VKTRY, the carbon fiber baseplate deflects when an athletes lands, helping to decelerate the athlete and significantly reduce the force and load on the joints – like landing on a diving board or trampoline. Athletes wearing VKTRY Insoles have the immediate ability to jump higher and land softer. 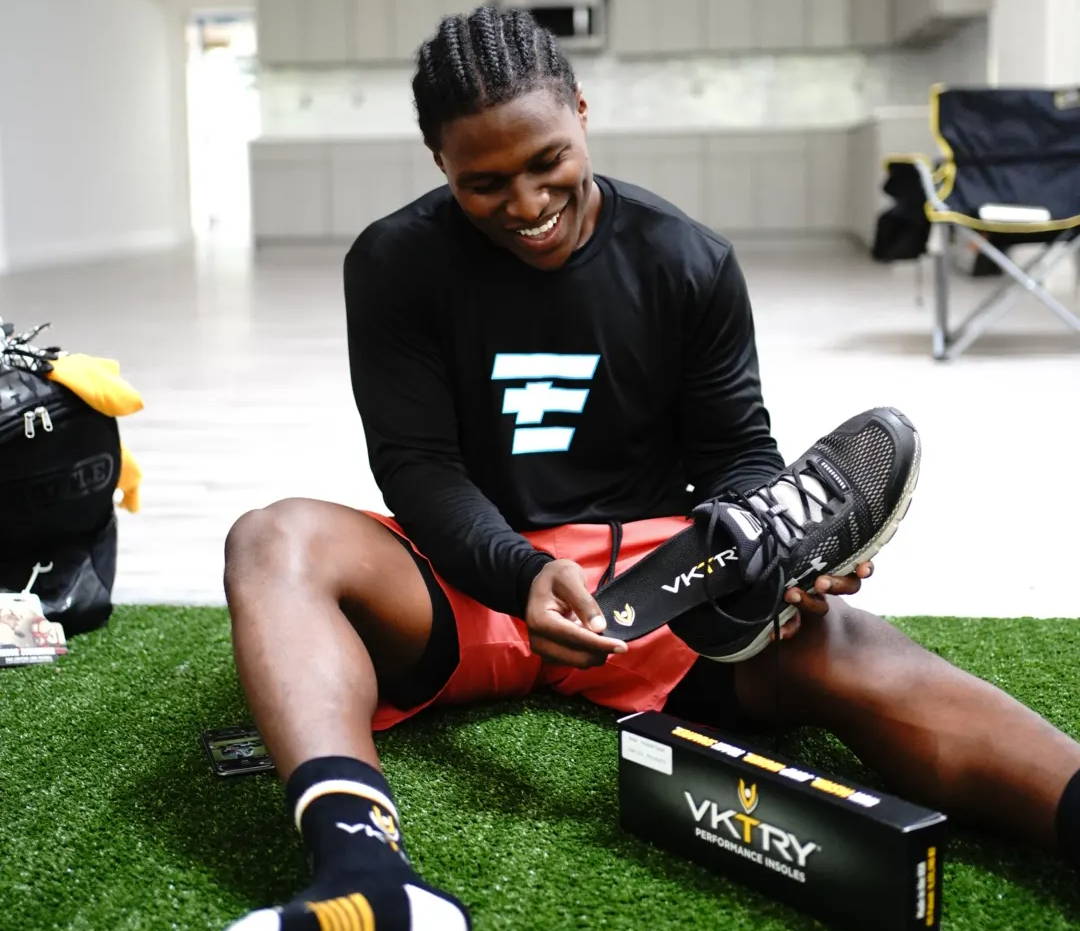 Many walkers, hikers and runners will use some of the insole brands mentioned previously (Superfeet, Spenco, Currex, Sof Soles). These products will add support, stability and shock absorption compared to the factory insoles that come in most footwear. Serious runners have discovered that some of the new, high-tech running shoes are made with carbon fiber built into the soles. These shoes provide propulsion similar to how VKTRY Insoles work - energy stored & energy returned – and can help athletes run faster.

VKTRY Insoles are currently being used by elite athletes at over 400 pro and college teams because of the improved athletic performance and add injury protection. Athletes appreciate the immediate ability to run faster and jump higher. In addition, VKs provide a more solid heel-to-toe foundation which help athletes cut on a dime – important for most team sports like basketball, football, soccer, lacrosse, etc. And most athletes know that power starts from the ground up – and that VKTRY Insoles provide the best, strongest foundation to transfer energy and generate power.

While most insoles are made from foam and plastic, VKTRY’s carbon fiber design is a new, revolutionary technology for athletes. Many sports medicine experts are now recommending VKTRY Insoles for their athletes who are prone to or recovering from injuries. The product is patented and is the most researched insole brand in the world. With a 90-day, no risk, money back guarantee, athletes have the ability to try VKs for themselves – and learn if they too can run faster and jump higher with VKTRY.